“There are some very strange sounds in the world, Phillip. It doesn’t mean you have to fear them.”

“No, I was not exactly afraid, I was just a bit disturbed. I have never heard that sound before.”

Grandpa sighed and slowly sat on the boy’s bed.

“In other words, you were not afraid of the sound, you were afraid of not knowing what was happening?”

“Alright. That is not strange at all then Phillip, I would have reacted the same. That means you are cautious of your surroundings.”

“Well, now you know how it sounds when a typing machine falls out of the window.”

“And crashes on the asphalt!”

“That was a landing!” Grandpa laughed. “Can you name other sounds that are strange to you?”

Grandpa inhaled deeply and got silent for a minute. Then he continued with confidence in his voice.

“Well, books when you turn their pages, sound very particularly. Not all of them, just some. Have you noticed?”

“Yeah. The book that you read me yesterday. It makes a different sound than a book about the fish world.”

“Does it? Perhaps because the pages of the fish book are colourful and thick.”

“It smells a bit different too.”

“Phillip, you could be a detective,” Grandpa chuckled. “I never knew you are such a great expert of sounds! So now it’s your turn.”

Phillip paused for a moment.

“Glasses? Do they make a sound at all?”

“Mine do. When I put them, they slide on my skin on the sides of my face and make this sound. It’s more silent when it starts, but becomes louder approaching the ears. Whoosh…..”

“Whoosh you say? This sound reminds me of closing the window on a very windy day, but not the glasses at all. When the window doesn’t want to close, but you force it, you know. Then it makes this sound.”

“Not exactly. The whoosh of closing the window is more distant and comes together with a whiff of air into your face. Glasses make this very timid and soft sliding sound, almost unnoticeable.”

“I really have never noticed any sound that glasses make Phillip, you are making this up.”

“A smile then!” Phillip jumped in his bed. “You just smiled and it made a sound!”

“Did it? Oh my Phillip, you are unbeatable, what does it…”

“It makes a mild clicking sound, I have tried it many times myself! When your lips move up and detach from your teeth.”

Grandpa smiled again and again, and started to laugh.

“It really makes that sound! I wish I knew this earlier. Then I would have never smiled next to your grandma’s ear!”

“I have another one,” grandpa started mysteriously. “Do you know which sound I fear the most?”

Grandpa seemed to feel so humorous and laughed so hard that his lungs started to whistle.

“Oh, Phillip, we should continue this conversation tomorrow. I will take my notebook and start a glossary of sounds, ok? Now I will be going to bed. Slowly sliding in my Christmas slippers… Now they will be making a whoosh!”

Phillip giggled for the last time.

“Alright grandpa, but can you leave the door a bit open?”

“To hear how little mice are running up and down the stairs?”

“There are no mice in our house, grandpa, otherwise I would have heard them!”

Phillip was listening to the steps, echoing in the hallway and disappearing in grandpa’s room. It was ten steps away, three floor squeaks ahead, passing two small cracks in the wall on the left. He heard his grandpa silently walking in the distance, and climbing to his bed at last. The bed squeaked, as everything is this house.

Phillip turned on his side. His bed made a crying sound as well, but a totally different one than his grandpa’s bed. A kind of sound that new beds experiencing first signs of their years of burden make.  The boy was sleeping in it since he got out of his cradle and moved out of the parent’s room. That happened when his sister was born six years ago.

His sister’s room was just next to his, only four big steps to the right through a small passage between the wall and eight stair railings. His sister would always ask to keep her door open, as well as the table lamp. Phillip would sometimes hear his mom silently walking into his sister’s room and switching the light off. “Click-click”, the button would say, springing down and up.

His mom then would whether go straight to her room or come to check on him. He would always keep his eyes closed on this occasion, pretending to being asleep. Sometimes mom would stand in the doorway for a bit, breathing silently, probably looking at him. He didn’t particularly like it, but he never said anything. He just waited until she turned away and slowly closed his door, leaving just a tiny opening for him to always hear what is happening in the house.

Phillip liked some sounds better than others. He especially enjoyed those sounds which he was familiar with the best. His cat purring while sleeping next to him. The kettle buzzing with water miraculously trying to come out in the form of fumes, which would make his palm moisty and very warm if he held it above the kettle. His sister colouring with her pencils, some of which were shorter than others, especially red, because that was her favourite colour. He would sometimes find the shortest red pencil in her drawer, scribble something on a piece of paper, and hide it somewhere in her room for her to find.

Phillip didn’t enjoy the sound of biting an apple or a pear. It just sounded too violent perhaps, tearing a piece of a unit away viciously. He did not enjoy chewing sounds in general, and he would always think about the thing that is being eaten rather than concentrate on the eater. “Crush crush crush crush” echoed in Phillip’s ears whenever someone bit and chew something. “Gulp”, and there was no thing any more.

Phillip despised all sounds of absence. He could not stand a knock on a wall which was very thin and had a cavity behind it. That sound was particularly dull. He also disliked the clang of an empty bucket. If he would finish his sandwich and someone would tap on his lunch box, he would hate that sound enormously.

The most despicable sound he has ever experienced in his life was a man, not breathing. That sound scared him so much that he would wait until everyone has fallen asleep, get out of his bed as silently as he could, and go to the corridor. He would concentrate, and listen to every single sound surrounding him. There were not many sounds during the night in the house. Clearing all others out, he would only care to hear three deep breathings. He never wanted to hear the absence of this sound again. 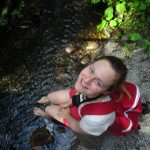 Gintarė Kudžmaitė is a short story writer from Lithuania.

She studied Philosophy at Vilnius University which was followed by the Master in Learning and Communication in Multilingual and Multicultural Contexts at the University of Luxembourg.